National home prices have increased by 5.4% since this time last year. Over that same time period, interest rates have remained near historic lows which has allowed many buyers to enter the market and lock in low rates.

As a seller, you will likely be most concerned about ‘short-term price’ – where home values are headed over the next six months. As a buyer, however, you must not be concerned about price but instead about the ‘long-term cost’ of the home.

The Mortgage Bankers Association (MBA), Freddie Mac, and Fannie Mae all project that mortgage interest rates will increase by this time next year. According to CoreLogic’s most recent Home Price Insights Report, home prices will appreciate by 4.8% over the next 12 months.

To see the rest of this article, click here.

The interest rate you pay on your home mortgage has a direct impact on your monthly payment. The higher the rate, the greater the payment will be. That is why it is important to know where rates are headed when deciding to start your home search.

Below is a chart created using Freddie Mac’s U.S. Economic & Housing Marketing Outlook.As you can see, interest rates are projected to increase steadily throughout 2019. 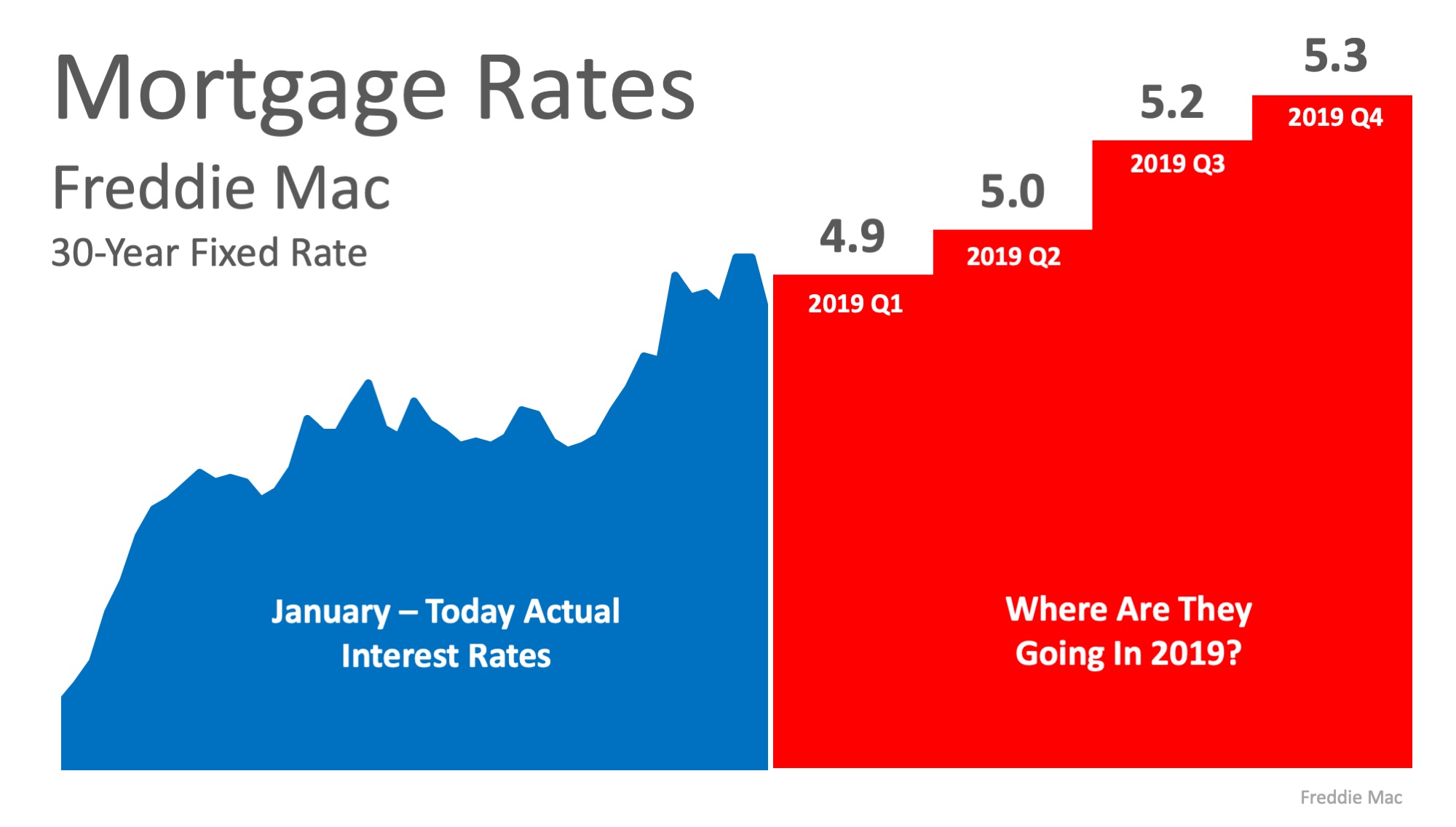 To read the rest of this article, click here.

Every three years, the Federal Reserve conducts their Survey of Consumer Finances in which they collect data across all economic and social groups. Their latest survey data covers responses from 2013-2016.

These numbers reveal that the net worth of a homeowner is over 44 times greaterthan that of a renter.

There are many who see that statistic and point toward how broad the range of respondents are for the Federal Reservesurvey. Their study includes all economic and social groups and also includes all age groups. The argument is that older respondents have a higher likelihood of being homeowners, while the homeownership rate among younger survey takers is much lower.

Home sales numbers are leveling off, the rate of price appreciation has slowed to more historically normal averages, and inventory is finally increasing. We are headed into a more normal housing market.

However, some are seeing these adjustments as red flags and are suggesting that we are headed back to the same challenges we experienced in 2008. Today, let’s look at one set of statistics that prove the current market is nothing like the one that preceded the housing crash last decade.

The previous bubble was partially caused by unhealthy levels of mortgage debt. New purchasers were putting down the minimum down payment, resulting in them having little if any equity in their homes.

Existing homeowners were using their homes as ATMs by refinancing and swapping their equity for cash. When prices started to fall, many homeowners found themselves in a negative equity situation (where their mortgage was higher than the value of their home) so they walked away which caused prices to fall even further. When this happened, even more homeowners found themselves in negative equity situations which caused them to walk away as well, and so a vicious cycle formed.

Many homebuyers think that saving for their down payment is enough to buy the house of their dreams in Bulverde|Spring Branch, TX, but what about the closing costs that are required to obtain a mortgage?

By law, a homebuyer will receive a loan estimatefrom their lender 3 days after submitting their loan application and they should receive a closing disclosure3 days before the scheduled closing on their home. The closing disclosure includes final details about the loan and the closing costs.

But what are closing costs anyway?

“Closing costs are lender and third-party fees paid at the closing of a real estate transaction, and they can be financed as part of the deal or be paid upfront. They range from 2% to 5% of the purchase price of a home. (For those who buy a $150,000 home, for example, that would amount to between $3,000 and $7,500 in closing fees.)” 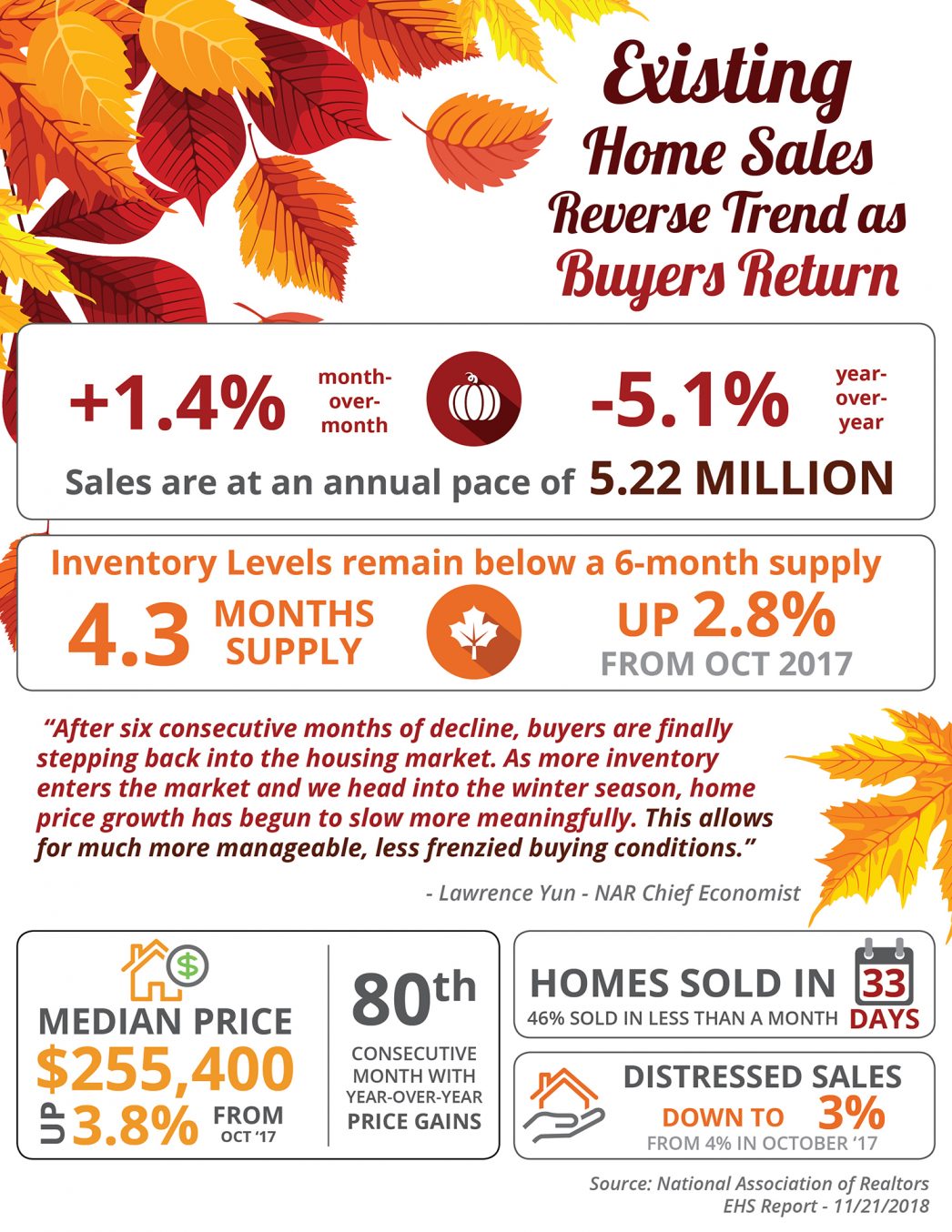 If you’re looking to buy or sell your home in Bulverde | Spring Branch, TX, let’s get togetherand see your options!

Everyone knows that housing affordability has been negatively impacted by rising prices and increasing mortgage rates, but there is another piece to the affordability equation – wages.

How much a family earns obviously impacts how easy or difficult it is for them to afford to own a home. Because of an improving economy, wages are finally beginning to increase – and that dramatically affects home affordability.

According to the National Association of Realtors’ (NAR) September 2018 Housing Affordability Index,wages have increased in every region of the country:

According to the latest Existing Home Sales Reportfrom the National Association of Realtors (NAR), the inventory of homes for sale this year compared to last year has increased for the last four months, all while sales of existing homes have slowed compared to last year’s numbers.

For over three years leading up to this point, the exact opposite was true; Inventory dropped as sales soared.

NAR’sChief EconomistLawrence Yun shed some light on what could be contributing to this shift,

“This is the lowest existing home sales level since November 2015. A decade’s high mortgage rates are preventing consumers from making quick decisions on home purchases. All the while, affordable home listings remain low, continuing to spur underperforming sales activity across the country.”

To see the rest of this article, click here.

The lack of existing inventory for sale has forced many homebuyers to begin looking at new construction. When you buy a newly constructed home instead of an existing home, there are many extra steps that must take place.

To ensure a hassle-free process, here are 5 tips to keep in mind if you are considering new construction:

Despite the fact that builders must comply with town and city regulations, a home inspector will have your best interests in mind! When buying new construction, you will have between 1-3 inspections, depending on your preference (the foundation inspection, the pre-drywall inspection, and a final inspection).

There are many questions about where home sales are headed next year. We have gathered the most reliable sources to help answer this question. Here are our sources:

The National Association of Realtors(NAR) – The largest association of real estate professionals in the world.

Freddie Mac– An organization which provides liquidity, stability, and affordability to the U.S. housing market in all economic conditions extending to all communities from coast to coast.

Fannie Mae– A leading source of financing for mortgage lenders, providing access to affordable mortgage financing in all markets.